Dave Cook returns to Bust for the latest Kickstarter campaign which will hopefully see a triumphant return to print for issue #3 and after an impressive start in issues #1 & #2 it’s a great time to jump on-board and catch up with the title so far.

The response to the first two issues seemed to be very positive – how did that feel?

That was really weird for us as a team, because Bust #1 and #2 were our first releases. I had a few shorts commissioned in anthologies like FutureQuake before but to see a full-blown issue we started from scratch go down so well was surreal. Some people have asked me why the ending to Bust #1 feels final, it’s because we honestly thought this was a one-time deal – that we’d tank hard and give up after one issue. We’re now in it for the long run and it feels awesome!

Has the success of those first two campaigns been a source of encouragement to you?

Massively yeah, and I sound like a skipping record with our backers but it means so much to us that people are willing to effectively take a bet on our titles enough to back them. There’s something special in that which I think you only get with crowdfunding – basically, it’s wallet-voting where people are so convinced by your title that they’re willing to preorder and pay for it with only a few promo art pieces, page previews and a campaign to go on. That’s a revelation for indie creators like us, and incredibly humbling too.

What can we expect from this third issue?

Bust #3 is what we’re calling internally as the Empire Strikes Back of the series, in that we’re going to see our characters hit rock bottom, facing impossible odds and with pretty much no hope left. It opens just a day or two after the end of Bust #2, with Jack, Lily, Dawn and Lambert shacked up in a log cabin, deep within the woods. They’re alone and are being hunted by both the Smilers gang and the mutated wildlife stalking in the undergrowth. It’s a crappy sitution that only gets worse – we have our Han in carbonite moment, pages of heart-wrenching loss, and the death of charcter too. 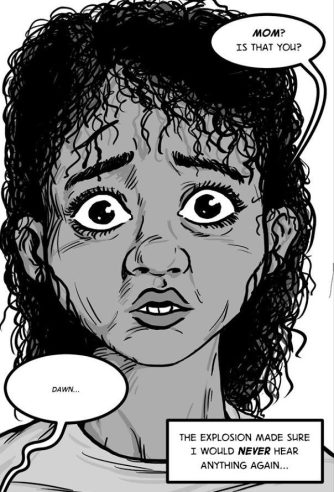 What I can reveal here is that Dawn, the young girl who holds the secret to curing the madness hat has gripped our American wasteland holds any secret, and she’s been a very fun character to write because in short, she’s deaf. We’re going to do some interesting things with sound, sign language and what it means to have a lack of communication with people in a world where people would already rather kill each other for food or water than to talk in a civil manner to overcome problems. I think people are going to really like her as a character.

Do you have the whole series planned out already?

We do yeah, it’ll be five issues in total, and if Bust #3 is our ‘Empire’ then Bust #4: Steel and Blood is our ‘Mad Max: Fury Road.’ It’s utterly insane, pretty much a 45 page car chase with our highest kill count yet, god knows how many expended bullets and I’ve lost count of the severed limbs. I really can’t wait to get the ending of that fourth issue in front of our fans especially. It’s a mind-blower. I haven’t written #5 yet despite knowing how it all ends. It sounds odd, but I’m almost afraid to start it, and say goodbye to this brutal and twisted world we’ve made.

Has the artwork matched what you had in your head for the title?

Yeah it really has and I have to give the utmost credit and respect to Chris as a creative partner, he has come leaps and bounds since we started Bust #1 together, and it’s pretty amazing to see his skills grow alongside mine. I love the style because it’s dingy, dark and a little bit retrograde – almost like an old back issue of 2000AD, something pulpy you find in an old collection one night and have fond memories re-reading it. Rest assured, this won’t be our only series together, the wheels are in motion!

Do you have a favourite character in Bust?

I like Lily personally, as she’s optimistic in the face of despair, and that’s something I wanted to write into the story from an early stage. Her inspiration me from several places, such as when I first read Rick Remender’s Low: The Delerium of Hope in which the main character Stel is a total optimist in a dying world. I’m a real pessimist when it comes to my own work so I wanted to shrug off those negative vibes and write a positive character, and of course, she’s young and into tech – the perfect foil for the old dinosaur that is Jack. She’s got some incredible scenes in the next few issues, a real transformation!

Just superb, and it’s weird but we’ve never actually met in person (the wonders of the internet!). He’s not just a contractor or collaborator, but an actually friend too. That said, we don’t pull punches when something’s amiss with the work, which is a superb quality to have with your team, as it means you’re always striving to get the best work out there. He’s also got infinite patience for my bouts of aforementioned pessimism, or while I’m freaking out over Kickstarters (they can be stressful!)

This is the third Kickstarter campaign for the book – what draws you to funding in this way?

It’s chiefly that wallet-voting I mentioned earlier to be honest, and because of the transparency it affords creators. You know I often get asked at conventions by attendees how you become a comic writer, through to getting a finished book out. It’s not easy by any means, but I always say to them that the barriers to entry have been lowered thanks to crowdfunding. But I have to thousands each year!) and demanding thing to get into, but once you get your finished book back from the printers and it’s in your hands as an actual physical thing – it’s just an unmatched, emotional and incredible feeling.

What else are you working on just now??

Right now I am writing issue #4 of Card Shark Comics’ other flagship series Vessels – you can get issue #1 at www.comichaus.com now! – and I’m working on the last two parts of a short six-parter called Feather with Norrie Millar about a small town that gets hit by an otherworldly force. After that, I’ll move on to a new series with Bust cover artist Craig Paton called Killtopia, which won’t see the light of day for a long time, but it’s going to be something pretty epic once we’re ready to share it. Fans of things like Ghost in the Shell and Borderlands will enjoy it. Watch this space folks!

Head over to the Bust #3 Kickstarter page to add your support and you can check out more on this over on the Bust Facebook page.  You can get hold of the first two issues of Bust over on the Comichaus website.