After a phenomenal run on Merrick The Sensational Elephantman (#1,#2,#3 & #4) the creative team of Tom Ward, Luke Parker & Nic J. Shaw returned for a one-shot set in the same universe and focusing on Merrick’s friend with a motive, Dr Treves.

Treves is on his latest trip to India but it gives him the perfect chance to recount a tale of his previous trips that had more than a little weird going on.  Having been working in a nearby village his medical training was called upon following an accident the village stone mason had while working on his latest sculpture.  The advice of a medical expert goes unnoticed though which trigger a whole hosts of unexplained goings on that impact the villagers first but take a firm focus on their visitor.

A nightly visit shakes Treves to the core and leads him down a dark road to destination cult that manipulates his actions in the Merrick run of issues.  It’s a slick addition to the world created by Tom & Luke and it’s a unique addition because it works both independently as a one-shot and as a strong background story for Merrick.  That in itself is a cracking achievement by Tom as he adds more mystery to the Merrick/Treves world he’s created (the Ward-iverse maybe????)  Luke’s art has continued to improve too as he’s really captured the dark, sinister vibe from Tom’s story which means it’s definitely got it’s own vibe to it away from the previous Merrick run.  The comparisons with Hellboy/BPRD are still there but far from being a carbon copy it’s perfectly feasible that this could exist alongside that world and match the quality in terms of both writing and artwork.  Teaming up with Nic J. Shaw completes the creative team and there’s a fair amount of narrative & dialogue that he works into the pages with a subtle ease that would almost go unnoticed but instead helps the pages flow. 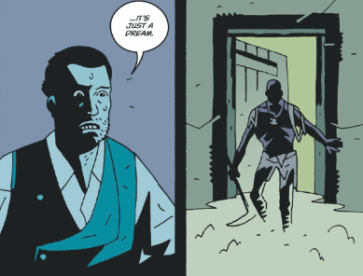 The burning question for me was always going to centre around whether Tom & Luke could broaden the creation by taking a step away from Merrick and STILL make it a success………the truth is they absolutely can & then some.  They’ve nailed it and they’ve cemented themselves in the indie/small press scene as a creative team that can hit the heights consistently and by producing something that feels fresh and compelling.  Give me more of this please….MORE, MORE, MORE!!!

You can get hold of Treves (and Merrick) over on their website and Merrick is available over on Comixology.  You can also keep up to date with what’s next over on the Facebook and Twitter pages too.

1 thought on “Treves – A Restless Night”