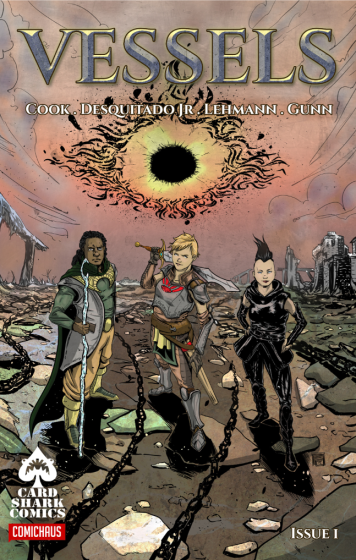 Writer/creator Dave Cook already has several successful Kickstarter campaigns behind him so it’s pretty much been a no-brainer to jump on board as early as possible with them and the latest of these sees his new series Vessels bring us a whole new world to explore.

It’s set in the grim surroundings of Cairnthala, a dying world that sees a demonic entity called the Eye-God flex its power over the terrified population.  Survival seems uncertain as they try their best to appease the all-seeing master within a fantasy world of witches, myths, legends and a blurred reality that mixes the ancient & modern life in a fairly unexpected plot that twists and turns.  Centre to this plot is the mysterious trio of Wake the reluctant but extremely powerful member who may be a force to reckon with for the Eye-God, Marillon a crafty thief/huntress & G’Dala the star pupil of the Mind Keepers who can help guide the team through their journey to bring balance to the chaotic world around them. 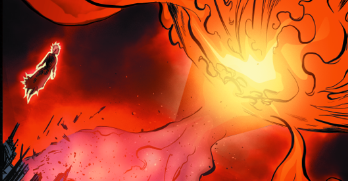 It’s good vs evil in its purest form as Dave weaves a tale of dark versus light and the clamber for survival clouds the judgement of the main populace in the story.  The blurred edges of reality and time periods brings with it a strange sense of familiarity and having Wake on the run from the beginning and taken to the brink of death alongside Marillon forms the type of relationships that slip under the radar at first as they seem so natural and subtle but they become all the more significant as the story progresses.

None of the main characters are saints but the world they are in won’t be saved by saints so it’s a necessity that they’re individual powers crackle with the energy & momentum that sees them arrive on the path they undoubtedly need to head down. The reveal of their main enemies in the last few pages leaves things in the balance but it’s the beginning of something big and most definitely something that I want to read more of.

The combination of Rafael Desquitado on art, Dennis Lehmann on colours & Garrett Gunn on letters produces some amazing set pieces, action and blurred worlds that manage to keep the vast new world from Dave becoming too overloaded.  It’s a finely balanced first issue and the detail within the narrative, dialogue, panel layout and plot has the air of a mainstream title rather than a small press one.  Dave’s upped his game and produced a title that lets the dark ooze it’s sinister vibe and the light remain full of hope and that in turn makes this an engaging read that lingers after reading.

You can also check out the ComicHaus website for more on this and Dave’s other releases.