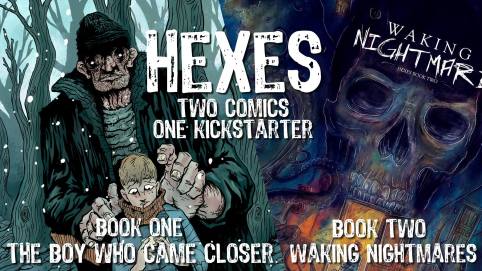 Simon Birks will soon launch his latest Kickstarter for the first two issues of Hexes which he’s hoping will join his already successful titles Gone & Sinners.

Hexes #1:The Boy Who Came Closer with art by Ege Avci

The first issue tells the story of Brendan as a moment from his childhood triggers a series of events that haunt him for the next 15 years.  Told in a mix of present day & flashbacks we get a glimpse of the event itself and the gradual increase in it’s impact on his life.  Haunting his dreams, shaping his relationships and ushering his days onwards into tiring episodes in an existence that leaves him shattered and almost alone forever. That changes with the his return to the cottage and the development of a new relationship with Tamsin……but he soon lets her in on the secret of the event and the visions that seem to be trying to tell him his fate.

A great mood to the story is created through the well constructed narrative by Simon and the plot flips from past to present fills in the blanks amazingly well.  The art work from Ege Avci has an amazing Jeff Lemire vibe to it with it’s muted tones but a power behind it that gradually comes to the surface for the big finale. 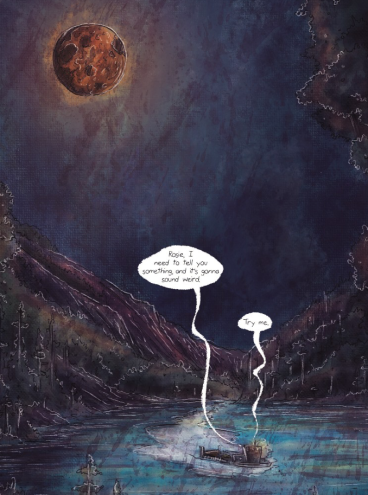 The second issue has a similar theme to it with our haunted central character, Ben, experiencing dreams & visions that have haunted him since he was young.  A similar use of flashbacks is in play here but a quicker pace and growing horror feeling to it sets this apart from the first.  Monsters from his nightmares seem to come to life year’s later and Ben chooses to take a head-on approach to tackle this and stop them once & for all.  There’s some brief introductions for the supporting characters but the real focus is the horror that does it’s best to torment Ben.

Simon builds a grim sense of hopelessness in the predicament of Ben’s situation but he quickly turns that on it’s head and steers us out of the dark into the light with his sharp dialogue.  Dark, moody art from Lyndon somehow manages to generate a sense of panic with his glorious colouring and a hint of Ben Templesmith to the gritty, almost sketchy style building a sense of energy that matches the story’s pace.

It’s a phenomenal addition to Simon’s growing list of comic book titles as Hexes broadens the type & style of stories he’s able to tell.  Teaming up with just the right artist for each type of story across all his stories seems to be another string to his bow that hopefully means we’ll see all his titles continue to become the type of series that highlight the quality that exists in the small press/indie world of comics.

You can find out more on this over on the Blue Fox Comics Facebook page and keep an eye out on Simon’s website & Facebook page for more details on this & his other titles.