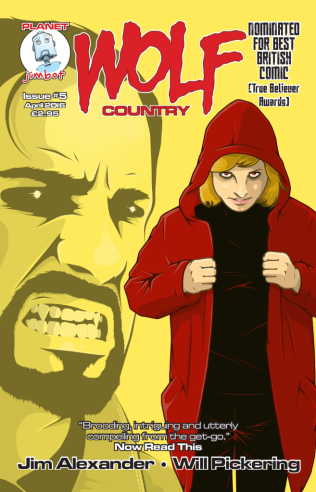 Jim Alexander teams-up with Will Pickering as he returns to his creation Wolf Country for issue #5 and the further tales of Vampires & Werewolves.

Those first four issues (#1,#2, #3 & #4) managed to show us a brand new dimension to the face-off between Werewolves & Vampires while still managing to maintain the very elements that draw us to these types of story in the first place.  The strength of those first issues continues into this latest release with the intricate world becoming bolder and the tangible feeling of scale really starting to take effect.

Luke “The Boy Who Killed Wolf” returns to the fold and his significance to the overall story seems to grow with each issue and this all seems to part of Jim’s bigger plans for the title as a whole.  The politically charged split between the Vampire City & the Wolf Country sees the cruel edge to both sides and it’s hard to see exactly whose side you are on but that keeps the title away from being a middle of the road story but a constant swing one way or the other as things progress.  Cruelty on both sides gives it a social experiment edge to it and it’s an intriguing story to read through all issues in one sitting to see just how many times you change sides.

Art wise Will hits the same heights here as he has done before and there are some truly stunning pages that capture every twisting element in a series of panels or even just one.  There is an odd occasion where the detail disappears from the backgrounds but in the context of the story it helps focus onto the narration or dialogue from the winding story as it crosses from Vampire to Werewolves and back.

Another stellar addition to the ever-growing Wolf Country which yet again has me looking for the next issue to learn more on what’s going to unravel between both sides. There’s also another nod to Luke Cooper who provides another top cover onto the series.

You can get your hands on this & the collected edition of the first 4 issues over on Jim’s Etsy store and you can keep tabs on what’s next for this and his other titles over on Twitter.