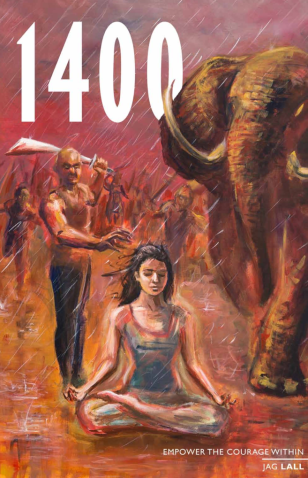 Jag Lall brings us a new graphic novel which chooses to tackle the emotional trauma of rape & abuse and help prove just how broad & versatile the comic book form is in the process.

Following the life changing events that rocks Sharanjeet’s day-to-day existence, the story develops to show how she was groomed by her new boyfriend as he gained her trust and lured her into a series of situations that lead to her attack.  The gritty approach to a sensitive subject like this is dealt with as delicately as possible by Jag and the choice to depict her attackers as grotesque demons acts as a powerful tool to show the vile acts that seem to exist outside of being a human being.

It’s no surprise that it’s a difficult read in places which is more because of the subject that the writing quality. In fact, Jag manages to balance the grotesque and the abject loneliness of the victim with a great deal of care to the point that you’re almost shouting out in your inner voice for her to tell someone and get help in trying to somehow tackle what’s happened to her.  The torment she puts herself through has a vivid & tangible feel to it which is partly down to the script from Jag as he shows the many stages of trying to cope as anger, disgust, guilt and a strange level of acceptance brings with it a sense of our central character being a true survivor.

The ultimate goal is to empower the victim and the nightmare sequences that depict Sharanjeet as a warrior battling her way through the demons that are out to harm her take things to another level.  It helps emphasize the valid argument for the comic book form being more than just a throwaway experience that can offer escapism but that can also give hope for others in the face of the worst life has to throw at them.  It’s as far away from reboots or wise-cracking superheroes as you can get but just as crucial a tool for telling stories that can impact people’s lives…..something that the Indie world seems to achieve time and again with a rawness to their creativity and a real energy behind that.  Jag achieves that and then some with 1400 and while it’s a difficult subject their is still a lot of positives to gain from releases like this.