Chris Welsh & Ammar Al-Chalabi bring the first arc of their Wart comic to a close and after issues #1 & #2 impressed so much it was high time I caught up on this third issue.

After Wart escaped his cell in the last issue he is now on the run and cast adrift across other dimensions and while Wart has introduced characters fairly patiently it’s only now that that groundwork is beginning to take effect.  The world is not big enough to contain the story that Chris & Ammar have to tell so the next logical step it to to broaden the horizon with a journey across multiple dimensions.

Wart and Blythe have been quickly tuned in so they are n-sync as they face-off against the unseen horrors between universes and while that was hinted at in the last issue it’s here that the sense of scale really begins to kick in.  The push for redemption seems far more tangible and the world(s) of attackers sees things get complicated very quickly for our central characters.  The energy as built up to give the gang momentum and the story from Chris captures that exceptionally well as the events unfold. 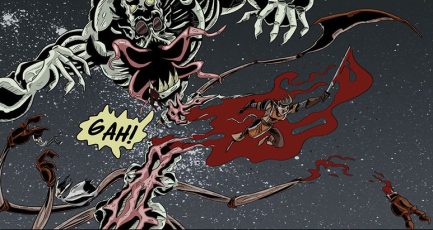 Ammar continues to hit the heights as the mix of ultra-dark themes and a cartoony style shouldnt work but the team here have taken that perception and turned it on it’s head……it works and then some.  The action is page-turning and the depth in the main characters & the world around them as a whole is captivating with Chris & Ammar taking this up a level with every issue.  Well paced and slick to look at – it’s one of the many hidden gems in the indie comic world and eases into the “recommend” list without a second thought……roll-on #4.