Kid Monkey is the latest release from comic creating machine James McCulloch and it’s a change of direction from his usual horror themed antics.

It kicks off with a government project to create it’s own genetically altered commando unit and while this plot hovers on the surface the background & heart of the story is one of brothers Caine & Abel.  Torn apart by an incident when they were young it’s a past that comes back to haunt them both and begins to shape the world they’re in now.

James has taken a big step in broadening the comics he produces with a tongue-in-cheek, cliché-filled opening issue but the pacing and the plot lines he has merged together are a stunning mix.  He is joined by artist Paul Johnson & colourist Lauren Knight who embrace the story and give it a unique look that feels like this is a comic adaptation of a cartoon series…..and stunning cartoon series at that.  It’s bold where it needs to be, muted where it requires it and there’s an underlying energy to the action that makes this a real page turner. 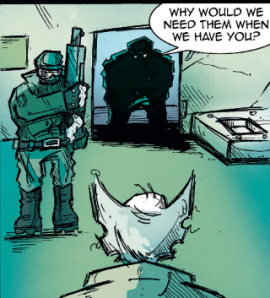 A fun change of pace for James and one that I hope he’ll pursue further because he’s showing that there’s more to his comic writing talents than just horror.  It feels and looks like there’s much more involved than a 36 page count would suggest and that makes it a success on multiple levels which is down to the whole creative team hitting us square in the jaw with a monkey fist.  There’s parallels with the Caine & Abel story and the likes of Captain America & The Winter Soldier but that’s a fleeting observation at most as there is a still a unique almost cult feeling to this first issue.

Go check out the Facebook page for more on Kid Monkey and pick up the first issue over on the ComicHaus website now.

You can also check out James’ Kickstarter he has running for The Grime #2 and after a cracking opening issue it’s well worth a look.