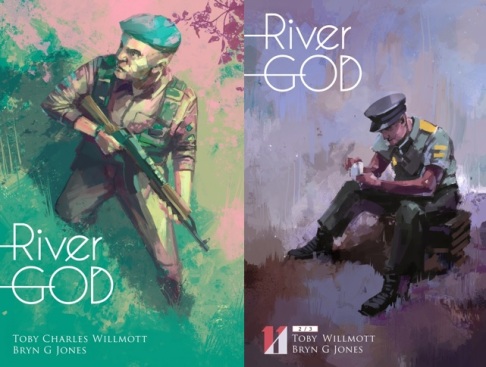 Writer Toby Willmott & artist Bryn G Jones bring us a sci-fi horror set in the wilds of Africa where a gruesome mix of poaching, murder & corruption is the order of the day as something mystical seems to be lingering in the background.

River God kicks off with the grim discovery of two bodies that look suspiciously like those of some missing tourists and this brings with it more questions than answers as their bodies show surgical scars that could well be the markings of organ harvesting.  It’s shrugged off  by the authorities as they don’t have the manpower nor inclination to start delving too deep into this new lead that’s washed up on their beach….and after all they are already working flat out trying to keep the poachers at bay.  Some big story elements right there and Toby & Bryn do an amazing job at building an almost tangible & claustrophobic atmosphere in this thriller/mystery.

The pages crackle with dialogue between the ranks as the characters try to manage their workload but the twinge of doubt and hint of the unknown quickly becomes an itch they’ve got to scratch.  Things unfold as it appears the team all know more than they are letting on and the frustratingly nonchalant attitude they have is another hook for us the reader. Bryn’s artwork is simple but the colouring really brings out the depth to the vast expanse they have to cover, adds action to the gun fights that break out and real menace to the face-to-face exchanges.  The first issue and most of the second issue twists & turns with some drip-fed facts along the way that build up to a reveal of sorts in the last few pages of the second issue.  This brings things to a head and a new cult seems to be at the heart of everything that’s going on which just adds to the tension further and the NEED to get hold of the last issue.

A great story so far that offers something new and fresh to get lost in – the characters are well crafted and while the use of names is few and far between it sort of doesn’t matter as we’re along for the ride.  The artwork is slick throughout but especially on those covers which act as an instant glimpse of the talent in the team.  Well worth a look and if you can get your hands on these you should give them a go.

Go check out the Kickstarter for the third & final issue where you can get your hands on all 3.  You can also get more info over on their website and keep tabs on the creators over on twitter too: