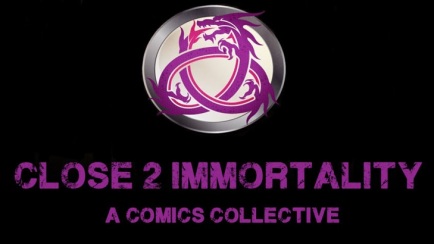 London Super Comic Con 2016 will see a new group of creators take shape as they aim to make their mark on the Indie scene under the guise of Close 2 Immortality.  These like-minded individuals will work together to boost the comics they pour their heart & soul into…………and as a massive Indie comic fan this has got all kinds of potential!!

The official press release from the team highlights their main goal as a new group releasing some of the best indie comics around and to embrace the already supportive indie comic community to gain success as a team AND as individuals:

C2I is a collective of individual creators and creative teams with a single vision of building a body of work that will live on well after they’re gone.

It is a platform for the collective’s members to promote themselves and their projects through a unified brand. The key is strength in numbers; building the name of the individual through the names of the many. C2I provides a platform for each other to be able to shout about what they do to more people; to signal boost each other and the projects they produce via social media and a larger presence at conventions.

The core members – Michael Burgham, Jon Laight, Jay Martin, Chris Sides, Chris Travell and Phil Woodward – are a collection of writers, artists, graphic designers, printers and amateur filmmakers who all share the same drive and the same passion for exciting and dynamic storytelling. With a selection of titles already released and a plethora of more to come, C2I is set to introduce a different way of working and a fresh, new perspective to the indie comic scene.

The creators will have several of their titles on hand at LSCC and will be launching Jay Martin’s ALV #1 there too.  Keep tabs on their progress, their kickstarters and their new titles over on the groups Facebook page and on Twitter…..and if you are at LSCC 2016 go track them down and get your hands on some of their titles.