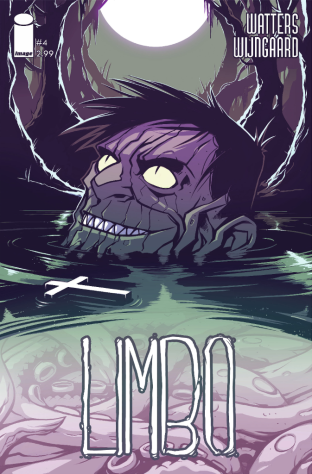 Issue #4 of Limbo from Image Comics sees Dan Watters & Caspar Wijngaard ease into the second half of their phenomenally consistent voodoo-filled detective thriller.

Our main man Clay finds himself in some tricky situations and while crossing over into new worlds may seem to be as bad as it could get, the opening in this issue turns that notion on it’s head – I won’t spoil it but it’s the beginning of a new quest to survive the unwanted & perilous attentions of The Thumb.

While Clay fights for his life, Sandy focuses her attention of appeasing the voodoo gods with her mix tapes with much less success than normal.  The two routes they take weave around each other and actually help to add a subtle mix of character building narrative and action that risks the life of Clay….which seems to be an all too common thing for our amnesiac Detective.  The plot thickens though for them both as new information is dropped in like reality bombs in a mixed up world of real and unreal that leaves us breathless & curious with it.

The blurred worlds, the twists in the plot, the voodoo magic & the hint of cannabalism all flash across the pages with a feverish pace that matches the tone built-up in those earlier issues.  This results in a wild ride of musical beats, glorious imagery and intriguing events which are rare things to capture in the paneled pages of a comic book but there’s a definite sense of depth across every issue of Limbo so far and that momentum looks & feels like a positive force to be reckoned with. 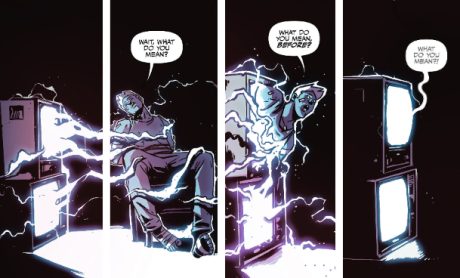 Dan & Caspar contain the elements well which they’ve done since the start with the only concern being that we’re edging closer to the end of a series that is teetering on the edge of becoming another classic release for Image.  Jim Campbell’s lettering is another dimension that makes the difference here as the narrative & action don’t feel crammed with too much detail and yet there is a lot to read in this and the previous three issues.  A creative team that’s been firing on all cylinders since page one of issue one and if they could bottle this level of consistency….they’d have another winner alongside Limbo itself.

Check out the series over on the Image Comics website – You can check out more of Caspar’s art over on his facebook page and you can keep tabs on him & Dan over on Twitter too: