Mark Millar & Sean Gordon Murphy teamed up in their 4-part creation Chrononauts – which turned out to be a time-travelling roller coaster ride.

Corbin Quinn & Danny Reilly are the central characters for this sci-fi bromance as they use their scientific genius to seek their own fame and fortune on a televised trip through the ages.  They coast through the likes of 16th Century Persia, the American Civil War and many more as they try to live a fast life that will let them experience the best of fame, fortune & women. 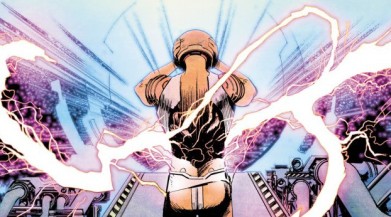 It’s a gloriously over-the-top adventure as their superiors try to rein them in as they go all gung-ho with the newly discovered abilities making the blood rush to their heads and fire out ideas that are half-thought-through but put into action anyway.  A tight, fast-paced story from Millar sees him return to producing some of his best work in recent years as its all-out fun from the first to the last page.  Teaming up with a talent like Murphy helps pour their passion onto the page as the wonders of scientific discovery, the petrol-head adrenalin and the quest to appease their ego takes their central characters to every where and every when you can think of.  Subtle hints and a bucket load of humour and fun made this instantly likeable.