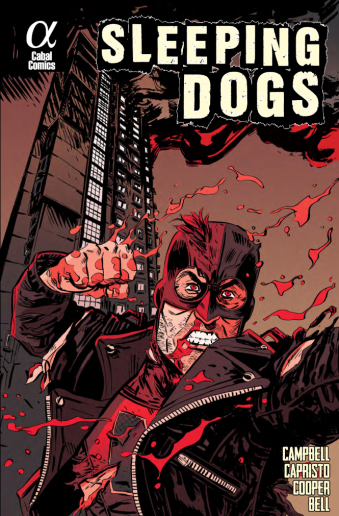 Cabal Comics brings us Fraser Campbell & Lautaro Capristo’s Sleeping Dogs which tells the story of city life and one particular father who has been pushed to the edge.

Central character Malcolm (Mal) is introduced as he emerges from his gig as resident “superhero” at local comic shop Mondo Comics but the illusion of his status is quickly rocked to its core with a police interview playing out as a narrative that is breaking some bad news to the world-weary Mal.  His son’s downward spiral has led him into a world of crime & drugs and his subsequent death sees Mal set his sights on local crime boss, Mark Batton. 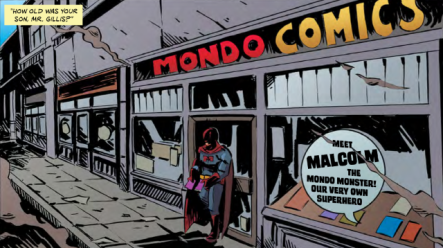 Batton’s status seems to have bought him the immunity he needs from the police and the violence that spills out from his tower-block base of operations sees the people of the local community become too scared to speak up or stand against this.  That’s all about to change though as Mal slips over the edge and is all set to get a face to face meeting with Batton – no matter what it costs.  Plans form, allies join the cause and the Tower Block is soon under attack from a new group of rebels hellbent on some justice.

This grim world is built-up by Campbell with what seems like effortless ease ( although I’m sure it was tougher at the time) but the structured world all makes sense, the characters within that have a weight on their shoulders that’s almost tangible.  A world where the bad guys are in control may not be something new and neither is the appearance of a vigilante to turn the tables but I don’t think I’ve read anything that seems to gather that power in such a short number of pages.  Campbell’s dialogue has the guttural tone of being up against the odds while Capristo helps to weave visuals together that balance ultra-violence with heartfelt moments between father & son…..resulting in what feels like an epic journey in a few six panel pages.  A special nod goes out to David B. Cooper on colours & Colin Bell on letters who chip in to round off a cracking creative team.

Less “Scottish” than I was expecting maybe but then the subject matter is far more universal than we’d probably all like to admit and the underdog taking the fight to those who are wrongfully in power plays out with a relentless, unforgiving realism…..even down to that bittersweet ending which helps highlight what it means to grasp hold of a cause and make yourself a hero as you fight for it.  Gloriously fresh in it’s execution and a prime example of the type of talent that Glasgow & the UK has in abundance – a talent that can deliver with the stories they want to tell.

You can grab a copy over on the Cabal Comics online shop and keep tabs on this over on Facebook too.