Dan Harris has just launched his Kickstarter for his new solo project, Druid Investigations and I got the chance to fire some questions his way about this title & what we can expect.

What can we expect from Druid Investigations?

A lot of fun. The whole point of the story for me was to take classic British Myths and Legend, real British history and then mix that together and have people deal with the fallout in the modern day.

I intend to use a lot of the celtic legends and the Mabinogion as reference material.

It’s about Merlin and a modern man called Killian Turner. They’re sort of polar opposites, with Killian being sucked into a world that he was only used to seeing as a work of fiction.

There’ll be action, magic, comedy and the most unremarkable man being put into the most remarkable situations. 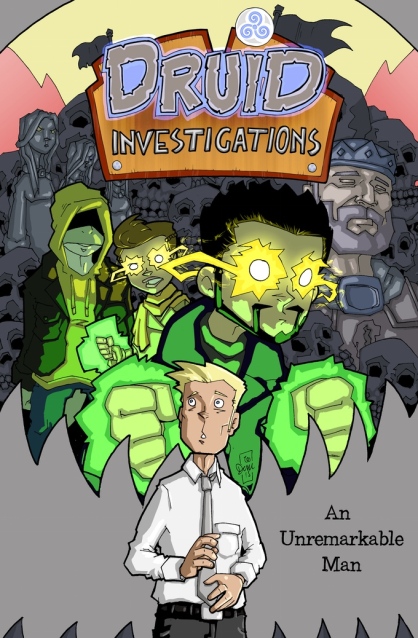 Is this a story you’ve always wanted to do?

Yes! For years I’ve known I wanted to do something that uses history, legend and mythology as its base. This initially led to me writing a comedy set in Ancient Greece. That’s a project I would love to go back to at some point, perhaps as a webcomic.

For years I would go back to trying to think of cool things to do with Merlin. It was initially quite serious in style. The basic story was the same but it was darker. There was no Killian Turner at that point either. It was Merlin trying to find out why Britain had so many monsters in a time where magic was supposed to be dying.

It was from discussing it with Gavin Mitchell that I was encouraged to really develop it. We would have long phone conversations where we would spitball ideas back and forth. Around the same time, we were discussing his own pet project, “Out to Sea” which he is also now developing properly. Gav is actually responsible for all the hard work that went into making my Kickstarter video! He coloured it, edited it, animated it, sorted all the sound levels… I don’t think my video would have half the quality it does without his help.

You’re tackling writing & art duties – how has that been?

Oh man! That’s tough! From being part of a collective team that bounced off each other to going solo? Yeah… Tough! When working on Lou Scannon, we have a nifty little process and system for getting things done. Doing it all myself has been… an education. That was part of the reason for doing this as well though, if I’m honest.

I created Lou Scannon a loooooooooong time ago and I developed it and developed it and ended up giving myself a block of sorts. I just didn’t know where to start with it as a series. I knew the history, present, future but couldn’t pick an appropriate start point. Kris took the reins at that point and made up a story just slap bang there. It was just… there. He didn’t overthink it, he just started it. Then Jim came on board with issue two and it has been one of the most rewarding experiences of my life. I love those guys, but after that I wanted to prove to myself that I had what it takes to do it myself.

An idea I’d had for a long time was doable by me and me alone. Whether or not it sucks remains to be seen. I haven’t had them there to “Save that trainwreck” as Kris might say!

Do you have long-term plans for Druid Investigations?

Yes. I intend for the first volume to be Killians induction into the world of magic. A trial by fire sort of story arc. After that, I want to investigate the other characters more and do a mix of story arcs and one shots. It’s hard not to say too much without giving away what I intend to do with it but there are cool little bits you can research for yourself. Like Mags. Margaret Pearson was a real person. She was convicted of being a witch in the 17th century and after being publicly humiliated, spent a year in Prison. In my story, it’s upon her release that she joins up with Merlin. I’m going to have a lot of fun playing around with that.

It’s your first Kickstarter – so what’s that process been like?

I’ve heard a lot of people say Kickstarter is hard work. Really challenging as there’s a lot to factor in that one might not normally think of.

They’re not lying! It’s been stressful! But the closer you get towards the end, the more you feel the pressure ease up. Then it just becomes a case of nerves. You become very aware that you’re asking people, quite often strangers, to take a punt on you. Someone they have probably never heard of.  I’m just hopeful the project is something people will dig.

You’ve got some great rewards in your Kickstarter campaign – was that easy to pull together?

Now, this came down to me thinking “What have I had as rewards from Kickstarters I have backed?” and “What would I like to receive” and going from there. I’ve tried to cater a little bit for everyone. Comic fans and perhaps people who may not normally buy comics but are intrigued by the premise. I wouldn’t say it was particularly easy to decide upon because there’s a lot of second guessing yourself involved. Hopefully, people will like what I have to offer.

Ha! Well, Lou Scannon fans will probably be happy to hear that as soon as this is done, I shall be starting on Scannon #8. A few people have been asking now. I hate leaving this long between issues but it’s been rather hectic as of late!

Lou has been a passion of mine since I created him back in 2001. His story is one that I want to get told in full but I want to do it justice and not rush out any old rubbish just off the back of the fact that we have built a pretty dedicated and awesome fanbase. They deserve better than that. So hopefully, issue 8 is going to be the start of a 4 issue story arc that people are just going to get a real kick out of.

I’ve also gone back to developing an old idea of mine, called “The Gas Mask Kids” which I’m hoping I can eventually put out there as collectible trading cards. Lets wait and see on that one though!

Go check out the Kickstarter for Druid Investigations now and get on-board at the beginning of something big!