The Kill Screen from Mike Garley & Josh Sherwell has recently finished it’s 4-issue first arc and the collected edition (plus a ton of extras) is up for offer as part of their Kickstarter……i got the chance to fire some questions at Mike and see what the future holds for their creation.

You just have to take a look at my reviews of issues #1, #2, #3 & #4 with their 10/10 ratings, to know that this title struck a chord with me from the beginning.  The humour, the quirks, the characters, the pacing & the artwork all seem to just work……and I “got it” from the very beginning.  That makes this reviewing gig a step away from being just a hobby and much more a way of life…..if I could get a day job like this it’d be perfect 😀

Here’s what Mike had to say in response to my fanboy ramblings…..

Is the response to The Kill Screen what you and Josh were expecting?

No. We obviously hoped it would be well received but we never expected to see it do so well. I think most of that is with technology moving so quickly, and being so prevalent in our day to day lives that the simple thought of ‘what would happen if technology went wrong’ really resonates with people. Love or hate technology I think we’re all aware how important it is, and how dependent we’ve become on it.

There’s a lot of great extras included as part of the Kickstarter – has a collected edition always been part of the plan?

It was after issue #1 that we decided that we wanted to do a collected edition – we realized that we already had loads of cool stuff we could use, and after that we just looked at everything we did with a collection in mind. It’s put us in a great position where we’re running a Kickstarter with five other stories already completely finished.

We’ve been lucky enough to have some shorts from the same Kill Screen universe – will we see more of those as the title continues?

Yes. We’re going to be doing a back-up strip featuring Nine-Lives the cat, which will feature a different guest artist in each issue. Everyone seems to love that damn cat and for me as a writer it presents a nice challenge of communicating a story without dialogue. 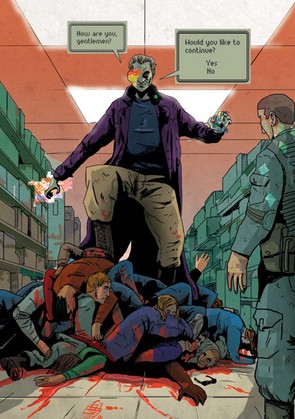 The nods to social media, gaming & pop-culture are subtle and well placed – was this something you & Josh had planned form the start?

Yeah, there’s actually more in issue 1 then the other issues and that’s because we didn’t want it to come across as gimmicky, or to be seen as a homage. The Kill Screen should work for everyone, regardless of their technical/gaming knowledge.

What can we expect for future issues of The Kill Screen?

Do you have an end planned for the title?

What else are you working on?

I’m working on a follow up to Samurai Slasher, SGT Steel (with Andy W.Clift) and a few other unannounced projects.

Their campaign got off to a flyer and just recently passed their funding target so this will DEFINITELY see the light of day and that’s a testament to just how popular an Indie title this really is……..I know I jumped on-board as quick as I could.  That now leaves them aiming for some hefty stretch goals and given the quality on offer & the extras they are adding there’s no reason why they can’t reach those levels.

Go check out the Kickstarter page and you can get your hands on a real gem of a comic that the creative team look to be getting ready to expand on further.