As a followup to my recent feature on the Memorial Anthology being produced to commemorate the Great War, I got the chance to talk to creator Christopher Geary and Wonderfunders publisher James Lynch.

What can we expect from the Memorial Anthology?

CG: As well as the main events of the war, you can expect a retro style Battle Annual type book. It’s not just about the main stories, it’s also about individuals that fought in the war and the human condition.

JL: Passionate work from writers and artists who understand the way this particular war reshaped the Western World while not resolving many of the issues that caused it. 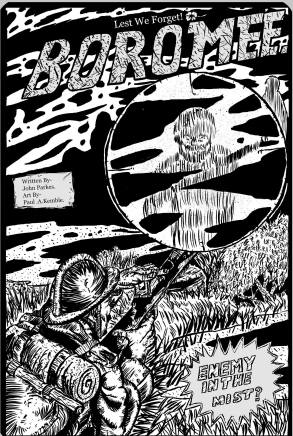 Boromee – art by Paul A. Kemble

What was the main motivation behind the anthology?

CG: Well to begin with it is about the 100 year anniversary and to never forget the sacrifice and difference this war made for ever. Also my love of retro war comics.

JL: My main motivation was to help Christopher produce a project that he obviously wanted so badly to do.

How does this project differ from others you’ve worked on?

CG: Most of the stories and situations inside if not all are based on true events.

JL: The proceeds going to a charity that helps children really moves me.

(Below) – Some work in progress for Jay Martin’s ‘Brothers In Arms’ with art by Louis M. Slater:

What’s it been like working with such a large group of creators/contributors?

CG: That part is very humbling that so many people would give time and a great deal of effort to work upon this worthwhile cause. Everyone clearly believes in it.

JL: I am almost always managing projects with many participants. I am grateful to be in the company of people who both revere history and are willing to donate their time and talents to such a worthy charity.

What’s been the biggest challenge with the project?

CG: That’s quite hard to answer, because I enjoy creating especially when that goes on to entertain the viewer. I have however found it a brilliantly challenging learning curve on how things come together

JL: Because we are an all volunteer group, we cannot be as demanding of our participants. This project is a longer term commitment for the management team.

Has this been a tougher project given how poignant the subject matter is?

CG: Some parts are but the stories are so wonderfully told and diverse that it has also made it a pleasure, after all this is my hobby and it is wonderful to see a vision realised.

JL: It is meaningful, but to be honest, although I am old enough to have personally known people who fought in the war, the only emotions I feel when writing about humans killing each other are anger and despair. I hope some writer in the future will have only ancient historical reference to rely upon.

For more info you can check out the Wonderfunders website or get in touch with the creators through Twitter: