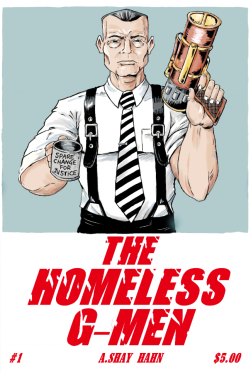 A.Shay Hahn brings us a story about a city that turns on the very men who had sworn to protect it after they’re implicated in the disappearance of the Senator’s son…..in true A-Team style they go underground and continue to fight the good fight.

The events see Detective Swinnerton, Axe-Celsior & Boyscout as they face the fallout of no jobs, no money & no self-respect and while the other members of authority fled any kind of action or attention………this group of wannabe heroes are still trying to make a difference.  Teetering on the edge as they attempt their day-to-day survival but always keen to drop themselves in the midst of danger to save the city and take down the bad guys.

This first issue is pretty plain sailing as we find out who’s who & what’s what but there are some crazy ideas in there to make this more than your typical origin story.  The loss of team-mate Splash, sees the gang spread the ashes at sea…….only for them to transfer their buddies spirit into a killer whale who now has justice on his mind.  Safe to say the bad guys end up sleeping with the fishes and they’re onto a second case before you can say “lets get to Seaworld”.

Their second case sees Swinnerton & Boyscout take on werewolves and other demon-like creatures in their quest to learn more about the details of the notebook Splash left them after he died.  Strange jumps in the plot are taken with a “matter-of-fact” air to them and the characters are committed to these events with conviction…..that somehow manage to fit together and merge ideas pretty well.  There’s a cliffhanger ending in this first issue that introduces more of the underlying mystery and one that’ll surely develop in future issues. 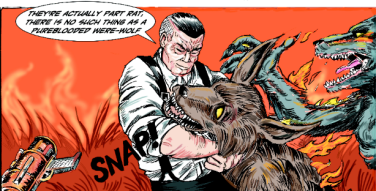 Although there’s nothing groundbreaking in this – it’s at least got enough direction and sense of fun to consider reading more but I would be keen to read a run of them I think to really get a grasp of where it’s going and how well the characters work.  Art-wise it’s consistent enough and has a B movie feel to it which shows that A.Shay is really trying his best to pull this off.  There’s obviously more to come with this in terms of the characters so far and new ones to be introduced…..so here’s hoping it continues with more of the same and increases the depth as we go.

You can keep up to date with this and Andrew’s other titles over on his blog and you can pick issues up over on this online shop.