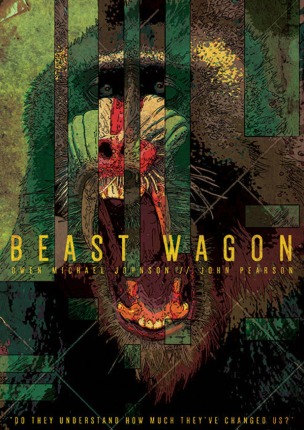 After a phenomenal Kickstarter campaign, an impressive Exhibition, a successful launch & an interview with me 😀 ………it’s fair to say that momentum is definitely with Beast Wagon – so when my Kickstarter reward copy of chapter one came through the door…..it was a dead cert for me to review

Writer Owen Michael Johnson & artist John Pearson bring us a world where the residents of Whipsnarl Zoo are more than a bit restless as they remark on the constant flow of idiots that have come to see them from the general public.  While the issue clearly defines the flaws of the visitors to the zoo, with their photo’s of animals taking a shit & constant need to almost force feed the animals on show – it’s the animals themselves that take centre stage……they seem organized…..well, at least some of them do. 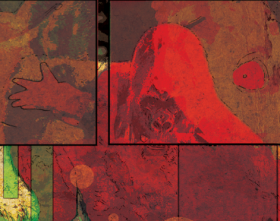 It’s a glorious mix of ideas as the characters within the animal groups range from sarcastic goats to lovesick hippo’s through to anarchy raising monkeys.  A mix that in anyone else’s hands could have felt messy and directionless but Owen manages to guide this ship with a similar steady hand he did in the likes of Raygun Roads to bring us a comic book with a purpose and instant justification for that Kickstarter success. 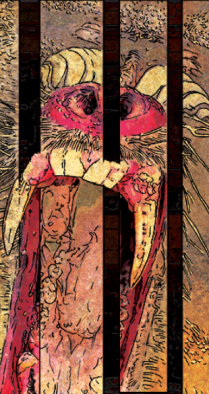 If that wasn’t enough there’s John’s art which captures the chaos and frenzied outlook of wild animals trying to find their place in the zoo hierarchy.  His wild art and a fairly unique feeling to his layouts had me trying to look at everything at the page all at once….THAT’S how good it is.  He somehow fills the pages with supercharged energy which triggers all the senses and letterer Colin Bell completes the package and adds another element of success for chapter one.

That combination from Owen & John brings us probably one of the best releases of the year so far as the humour as the talking animals give less of a Disney feel & more of an Animal Farm vibe – a comparison that may have always been on the cards but that’s as much for the significance of the release as the approach to their cast of characters.  Real world sensibilities play out as woman meets beast in a cliffhanger finale and the elements of social commentary & all out anarchic fun makes this one of those issues you re-read straight away.  The creative team have rewarded their backers well…..and if you were one of them you’ll have gotten a glimpse of chapter two,……..and I can’t wait.  Go get a hold of a copy now wherever you can.