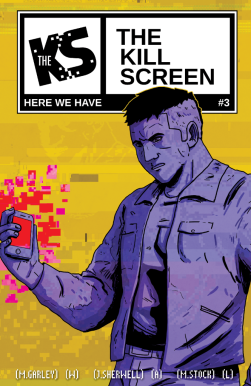 After a stellar opening with issues #1 & 2 that pretty much ensured an entry in my highlights of 2014 – I was lucky enough to get an early look at issue #3 of one of my favourite indie comics around.

Opening with a flashback to the early days of “The Kill Screen” event we see Marshall law take effect to try and stop the spread of what could spell the end for everyone.  A heavy handed approach is taken as the customers in a local mall face the gun barrels of the men in charge…..and it’s a case of use your mobile phone at your own risk.  Multiple casualties ensue as you’d expect but there’s a reveal of our main villain, CATS. 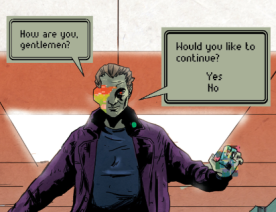 He’s a twisted face (or half face maybe) for the Kill Screen event and almost cult movement that seems to be taking over as an after effect.  That acts as a link to social media and makes this as relatable as any other comic out there which has been part of it’s overall success so far.  Back in the present the quest for survival goes on as Elle & Max get to settle in with the group that saved them but that’s soon shattered as CATS relentless pursuit sees a face-off between his army and the remaining survivors.  This all leads up to a final panel reveal which comes like a punch in the guts but the pacing up to this moment is so well executed that you’re left dreaming up what issue #4 will hold on your own.

It’s more of the same from writer Mike Garley, artist Josh Sherwell and Letterer Mike Stock as they work together to create a comic which is greater than the sum of it’s parts. The Main plot takes centre-stage as you’d expect but the subtle hints of humour injected into it come across very naturally and the nods to pop culture are ever-present, if not instantly noticeable which makes this just as much fun to read.  Smart, well-paced with artwork that merges a possible real world and a digital world with great effect….think Tron meets The Walking Dead only without all the mad lighting and you’re there.  If you’re not reading this then you’re missing out for sure.

Debuting at MCM London later this month (22nd-24th) – it’s reason enough to get along to the event and get yourself issues #1-3.  You can keep tabs on this over on the Facebook page too.