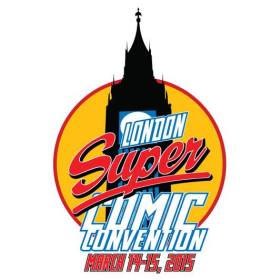 I recently attended London Super Comic Con which has quickly become one of the most regular entries in my calender for the year as it kicks off the Con season for me since it started back in 2012.  It has improved each year as 2013 & 2014 built on the success bringing an impressive roster of guests coupled with a firm focus on the indie comics from around the country and so much more.

Thankfully the seven waves of guests would ensure that I was hyped ahead of the event and well loaded up with comics/graphic novels to be signed while I was there.  LSCC has a fairly unique balance to it as a result of the team who work behind the scenes and the staff who help things move as smoothly as they possibly can over the weekend itself.  No small task given the number of fans who attend particularly on the Saturday (especially given that Sunday was Mothers Day) who flood to see the likes of John Romita Jr., Neal Adams, Bill Sienkiewicz, Klaus Janson, Michael Avon Oeming, Garth Ennis, Charlie Adlard and loads more and like last year the largest queue’s were managed pretty well by the LSCC team.  Unlike last year, they didn’t extend the ticketing system to other queues which they really should have and I lost about an hour queuing to have a couple of books signed alongside thirty other eager fans who watched as the artist signed around 200 LSCC prints before heading off for lunch.  I don’t grudge the lunch but to take up a guests time on LSCC merch in front of waiting fans added the only sour note to an otherwise successful Con.

The con was just as big as last year in other areas with Cosplay making a bigger appearance (at least that’s how it felt) and the additional panel room giving additional options of more panels to attend……although I seem to sacrifice most of those to actually get a chance to speak to the guests while I get something signed which is always a buzz in itself.  A panel I did make was the Sunday one with John Romita Jr. and hearing his stories about how he started in comics and the grief he got & still gets about his artwork gave a different light to a larger than life character whose work I’ve grown up with.  It also made me realize that while I may not have appreciated it when i was younger he’s an artist that can be the difference between me starting a title or letting it slip me by…..Superman is a prime example of that.

The other main draw for me though is the high Indie/Small Press attendance to the con and the floor layout gives a perfect amount of space to wander around and see what’s on offer.  Some great titles debut at LSCC every year too and this year saw the likes of Big Punch Studios launching their quarterly magazine BPM, Markosia launched a number of new books including Abominable Glory, Bloodfellas and others with more on offer and that was ON TOP of the LSCC exclusive variants & prints already available.  Nestled in among the tables of artist alley was also the likes of Lou Scannon, Moon, Random Trials, Dungeon Fun, Find and so many others that my head (and wallet) could explode at the thought of them.

I also got the chance to add to my Captain America sketches too…..and that’s ALWAYS a good thing:

matched it & to be honest the bar had already been set pretty high.  The group behind it have built up one of THE cons that make my year and 2015 was no different.  I had the chance to chat with some true comic book legends, I got the chance to catch up with some of the indie creators I’ve become friends with and more importantly I got to immerse my self in a room full of like-minded people where we all share a common bond regardless whether we know each other or not.  That makes the entire weekend something significant for this comic fan as it’s the truest outlet for my passion…….and while I may have this website in my mind & prospective interviews or reviews to aim for I’m still a fan of the comic book in all it’s forms.  Roll-on 2016.