I recently caught up with volumes 1 to 3 of Twisted Dark from T Pub & written by Neil Gibson as he’s joined by a group of different artists to bring us a very different anthology to life.

For me, anthology releases can be fairly hit or miss…..and in most cases it’s a miss but Twisted Dark was able to buck that trend quite easily.  Neil writes a varied mix of stories together as we see turf wars, tortured writers, self-made heroes & everything in-between laid out for us.  While some of the themes stray into the grotesque & more extreme areas the stories themselves are paced well and the advantage of an anthology is that if one story doesn’t quite float your boat…..there will be another one along in a few pages time.  I enjoyed the vast majority in terms of writing & artwork and while some were far more successful than others they all hit their mark.  The real enjoyment came from some of the unexpected tales that revealed their dark sinister edge in either the last panel or the last couple of panels & that made for a very interesting read – my enjoyment may be partly down to enjoying the gruesome twists a tad too much but it’s pure horrific escapism in this title. 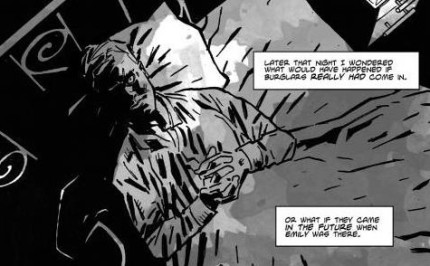 While this may be a straight-forward “one to consider” report on the release itself there’s a far greater difference between this and other Anthologies out there.  If you’re switched on enough you’ll be able to spot the intrinsic links across the stories on offer as characters appear or are even mentioned in other stories in the series.  There’s even more links if you can find them with the books from a writer in one story popping up in the background in a volume down the road…..maybe only spotted if you’re reading them back to back like me but as soon as I picked these up I got lost in them.  As soon as I partly recognized a name from another story I would back track or go re-read a story to be sure I wasn’t making these connections up and while it may sound quirky, the quality of the stories and the subtlety of those links is an added dimension to these first three volumes. 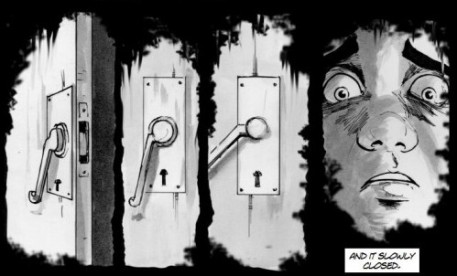 Twisted & Dark are two words I would use to describe the releases and it’s no wonder that’s the title settled on for them.  While the good stories are in abundance, the team of artists behind each volume is varied in both style and flow to their work but they thankfully match up perfectly with the theme of the story they are working on.  Reading the three volumes consecutively does bring to light the difference across the volumes where Volume 1 is a definite strong opener, Volume 2 drops a bit and then Volume 3 brings a slight feeling of de ja vu – most likely down to the connections between the stories than anything else but it did feel like this was where more ideas were duplicated slightly…..not necessarily a bad thing given those links but something that I’ll be interested to look out for in Volume 4.